Want to attract media attention by studying the toxicity of a nanomaterial? Then use graphene and study human sperm. There are already several studies that have gone this route. The new study published in Scientific Reports indicates that concentrations between 1 and 25 μg/ml do not affect sperm viability.

The new work, which is perhaps seeking an Ig Nobel prize, uses sperm to study cytotoxicity because in humans it is the easiest route. Previous studies in animal models (intravenous administration to mice of doses up to 1 mg/ml) show oxidative stress damage to DNA and cell membrane, accumulation in the testes, causing inflammation, nodules and lesions, and reduced sperm motility. 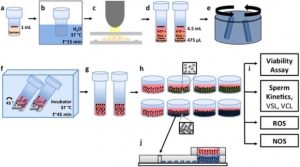 The viability of human spermatozoa in culture with different concentrations of SWCNT-COOH or RGO was quantified after 30 minutes and after 3 hours. For doses below 25 μg/ml, no effects on sperm viability are observed.

Signs of possible oxidative stress are observed, which could have adverse effects on male fertility in higher amounts and for longer periods than those studied. Therefore, the authors of the study call for future analyses of the effects of these nanomaterials on spermatozoa.